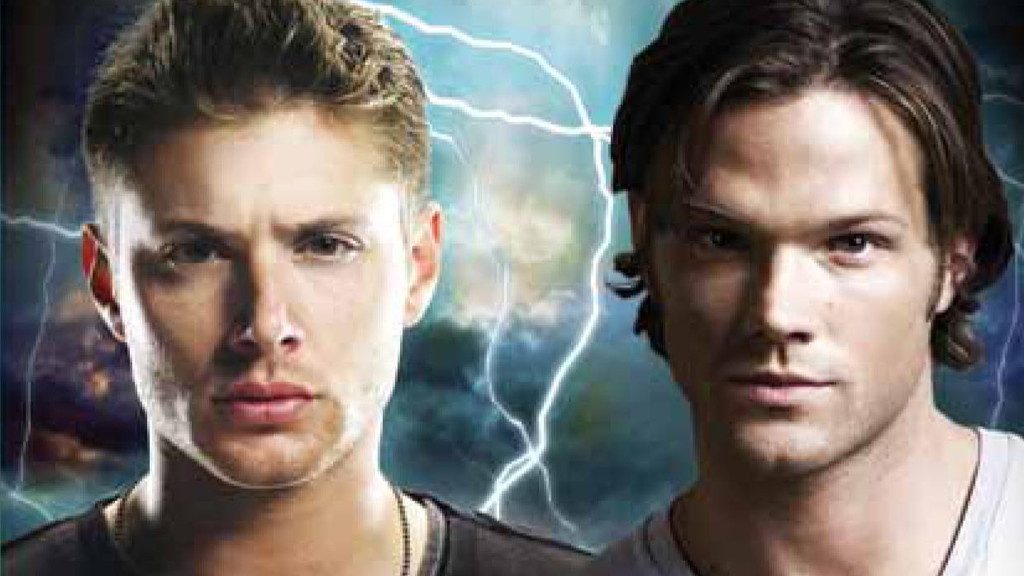 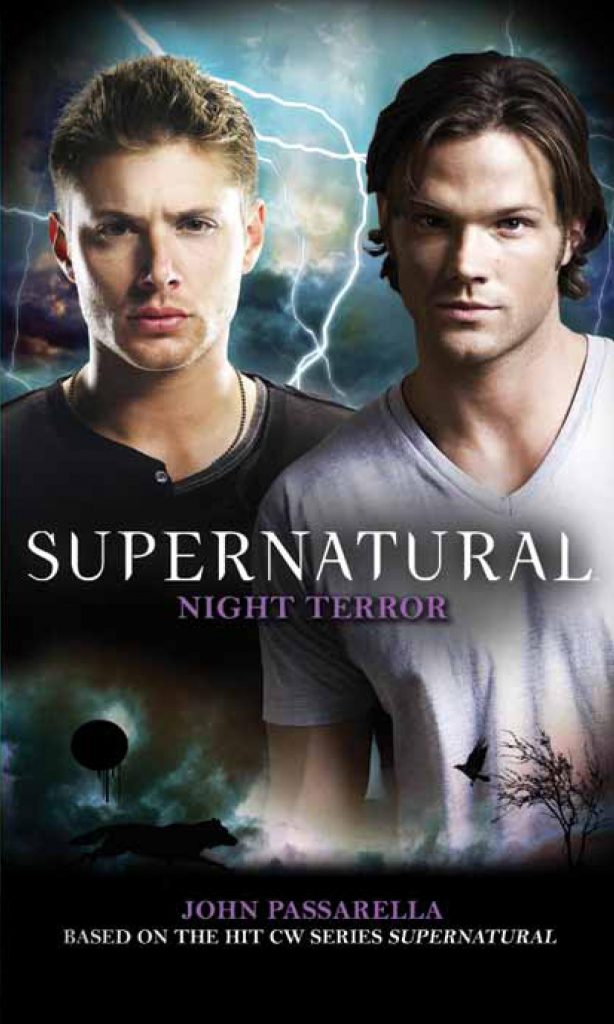 
What can you tell us about Night Terror?
Night Terror is set late in season six of Supernatural, which followed the huge apocalypse arc that concluded in season five. I was told right up front by the editor that my book should be a “monster” book, not anything dealing with the angel/demon mythos that had ostensibly concluded.

The premise of my novel is that a sleepy town in Colorado becomes terrorized by nightmares that come to life, which includes everything from B-movie monsters to natural disasters to Nazi zombies.

I tried to include classic psychological and anxiety-driven nightmare situations along with the type of fantastical nightmares young sleepers might have. My family brainstormed with me around the dinner table a couple evenings in a row to help me come up with assorted nightmares.

Of course, the Winchester brothers head to the town to stop whatever is causing the nightly mayhem, and soon realize that because of their horror-filled personal histories (for example, one brother has spent time in hell; the other was possessed by the devil), they had better not fall asleep, perchance to dream.

How did you come to write for Supernatural?
I’ve been a Supernatural fan since the first season’s first show and my enjoyment of the show has grown as the mythos has become richer. My wife is a huge fan, as are my two sons, so my writing Night Terror was almost as exciting for them as it was for me. I reclaimed some of the cool factor father’s tend to lose in the eyes of their children once they hit their teen years.

Do you think you have to be a fan of a show to write a successful tie-in?
Every writer would probably have a different answer to that question. My answer is yes, I need to be a fan of the show. That might limit my options for writing tie-ins, but I need to feel the same elevated level of excitement and intensity for tie-in projects that I have when I’m writing my own novels. I would never want to take on a project where I felt I was going through the motions of writing just to earn a pay check.

Did the storyline change much from the original outline during the writing process?
Not a whole lot. The biggest changes were subordinating the ultimate cause of the living nightmares in the overall plot, accelerating the story and expanding the scope of the nightmares.

I talked to [show-creator] Eric Kripke’s assistant on the phone and she suggested adding a town-wide tragedy to the mix to expand the “reason” for the monster’s appearance. She also told me to take a “no censors, no budget” approach to the novel, meaning I should show more violence than they are allowed on network television and take advantage of the cost-free special effects afforded by printed words on the page.

One fansite said Night Terror has the feel of a Supernatural feature film, so I think I succeeded on that front. 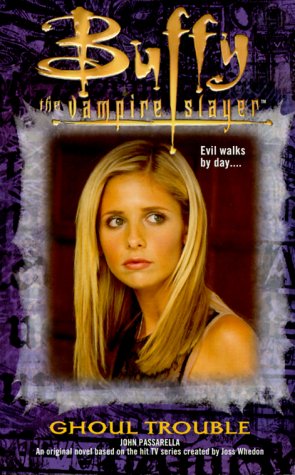 How did you first start writing tie-in books?
After my first, co-author novel, Wither, came out, the San Francisco Chronicle reviewed it and said that it “hits the groove that makes TV’s Buffy the Vampire Slayer such a kick.”

I was a huge fan of Buffy and reading that review, I thought, maybe I could write a Buffy tie-in novel. I approached Lisa Clancy, the editor of the Buffy books at the time with that quote and my stated enthusiasm for the show and asked how I should go about being considered to write one of the novels.

She told me to write a complete 10-12 page outline and a scene featuring all the main characters, which would ensure I could write their voices. That was the first time I wrote a complete book outline from start to finish in such detail before writing the book itself. I decided if I couldn’t nail the characters’ voices in the sample chapter, I wouldn’t bother submitting the proposal.

Members of my family were also fans of the show, so I asked some of them to read my sample chapter and let me know if I had accurately captured the voices. They thought I did, so I submitted my proposal and it was accepted.

While writing that novel, Ghoul Trouble, the editor said I would be a good fit for the new Angel tie-in novels and asked if I would consider submitting a proposal for one. That book became Angel: Avatar. A few years later, the new editor called with an open slot for another Angel novel, and that turned into Angel: Monolith.

For Night Terror, Cath Trechman, the Supernatural tie-in editor at Titan Books, found me through my website, saw I had written other tie-ins and wrote supernatural thrillers, thought I would be a good fit and asked if I’d be interested in submitting. So, other than my first inquiry for Buffy, each tie-in book has resulted from an editor contacting me, and that’s always a good feeling.

What was the biggest lesson you learnt when you first started writing tie-in material?
As I mentioned, if I hadn’t been able to make the characters sound on the page the way they sounded on the screen, I would have stepped away from the tie-in world. I had heard stories of otherwise successful writers who had tried and couldn’t do it. I hadn’t tried before so I didn’t know.

I think that’s the first thing you have to learn about yourself as a tie-in writer. Can I capture the character voices, then the tone of the show, then develop a story that feels compatible with the show’s universe?

Also, the deadlines are much tighter than for general fiction — two to three months is very common — so you have to work fast. That’s where having the book completely outlined is invaluable. No worries about writing yourself into a corner or experiencing writer’s block. Any logistical, story structure problems would have cropped up much earlier, in the outline stage.

You also write non tie-in material. How important is it to you that you create your own sandpit rather than just playing in someone else’s?
Obviously, with your own novels, you have complete creative freedom and expression. It’s your creation, your spell to weave. You can kill off any of your characters, take the story in any direction you want. Your story’s success equates to your success.

With a tie-in novel, you have to return everything the way you found it. You can’t kill off lead characters (unless you can resurrect them convincingly) or alter the show’s canon.

I always describe media tie-in novels to readers I meet as having the feel of lost episodes. It doesn’t change what you know from the show, but if you enjoy the show then the book is something you should also enjoy.

Creatively, with tie-ins, the setup work – character development and world-building – is already done for you so you can jump right in to the story. On the publication side, the tie-in novel will have a limited readership. By that, I mean it will be a tough sell to anyone unfamiliar with the show.

And, since tie-ins are work for hire, you basically get your payment up front and there’s little chance of earning much else from a title no matter how successful it is.

Of course, odds are the show has more fans than the average mid-list writer. So you hope fans of the show who do read the tie-ins will like your work enough in that world that they’re willing to venture into your own worlds.

All of my tie-ins have been for supernatural properties and since my own novels are supernatural thrillers, my odds for crossover readers are better than they’d be if my own novels were westerns or romance novels. Even with Night Terror, a few early readers have already emailed me and said they want to try out some of my own novels, such as Shimmer. So that’s the best case result.

What’s the biggest challenge of writing a tie-in novel?
Nailing the voices and tone of the show. You have to be a good mimic in your writing. Writers strive to develop their own voice, characters and style. When you tackle a tie-in project, the licensed property’s characteristics take precedence. It’s not necessarily harder or easier, but it’s a different skill set. Being a fan of the show certainly helps when you’re trying to fit something into the existing show’s continuity without repeating something that has been done before. Supernatural was in the middle of its sixth season when I began work on Night Terror and I was familiar with all that history. Even show, I flipped through the show guides to refresh my memory of previous episodes.

What top tip would you give someone who’s desperate to become a media tie-in writer?
What works for me and what always comes first is being a fan of the show for which I want to write a tie-in. When I can’t wait for the next episode to air, I know I have enough enthusiasm for the show to translate that energy into a successful tie-in novel.

What helped a lot with Supernatural: Night Terror was having access to current scripts. For a while I had access to scripts that were five or six episodes ahead of what had aired. As a viewer, I was very accustomed to hearing the characters on screen. The scripts showed me those voices on paper, which is where I had to create them. Initially, this was to show me how Sam’s soul would be restored to his body, since my novel would take place after that event and I needed to be cognizant of the details. But it soon became apparent to me that the scripts were a great asset to have to immerse myself in the voices of the characters. I referred to them often during the writing process.