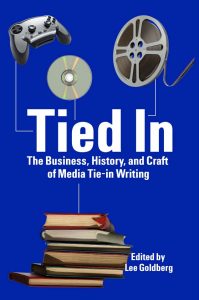 Tie-in novels are books based on pre-existing media properties—like TV shows, movies and games—and they regularly top the national bestseller lists. But as popular as tie-ins books and novelizations are among readers, few people know how the books are written or the rich history behind the hugely successful and enduring genre.

This 75,000 word book is a ground-breaking collection of lively, informative, and provocative essays and interviews by some of the best-selling, and most acclaimed, writers in the tie-in business, offering an inside glimpse into what they do and how they do it.

This book is an official publication of the International Association of Media Tie-In Writers.

‘The Business And Craft Of Writing Novelizations And Tie-Ins’ is a group discussion by several leading tie-in authors that gives their answers to the big questions: ‘Breaking In’, ‘The Deal’, ‘Writing The Novelization’, ‘Writing The Tie-In’, ‘Deadlines’ and ‘The Characters’. … ‘Tied In: The Business, History And Craft Of Media Tie-In Writing’ is an enlightening read for any reader interested in the trade and a useful tool for any writer keen to get involved in it.

“TIED IN doesn’t focus solely on television tie-ins. It also covers movie novelizations, comic book tie-ins and computer game tie ins. But that actually makes it even more valuable and more interesting.[…]David Spencer’s wonderful “American TV Tie-Ins from the 50s through the early 70s,” delves into the history of television tie-in novels and examines several of the writers from those decades, including William Johnston, Keith Laumer and Michael Avallone. […] Other essays I found particularly interesting were “Learning on the Job,” in which Nancy Holder discusses her experience writing her first tie-in novel, “This Time It’s Personal,” an account of how Max Allan Collins managed to write the novelization for a movie adapted from his own graphic novel, and “How to Novelize a Game,” William C. Dietz’s reflection on what goes into crafting a novel out of a computer/video game.[…] TIED IN is a fascinating exploration of the media tie-in business.”

“This is really interesting and entertaining stuff. I started with Tod Goldberg’s essay on writing the Burn Notice books, moved on Jeff Mariotte’s “Jack of All Trades,” got really caught up in Max Allan Collins’s “This Time It’s Personal,” kept right on going through the great round-table discussion, and read three or four more of the essays, including one that harks back to my era, David Spencer’s “American TV Tie-Ins from the ’50s to the Early ’70s.” All I can say about that one is that I’m glad I have my copies of John Tiger’s I Spy novels because I’m sure a lot of people are going to be looking for them now. I still have a few more essays to read, and I’m really looking forward to them. I was genuinely surprised at how much fun I had reading this book, and I’m sure most of you would like it, too.”

“If this is the Golden Age of anything in the popular fiction field, it may be the tie-in novel […]There have always been formidable writers doing tie-ins, but they have generally been dismissed, not unreasonably, as quickies tossed off for a fast buck. That image has been improved somewhat by the quality work of editor Goldberg, the late Stuart Kaminsky, Max Allan Collins, and some of theInternational Association of Media Tie-in Writers members contributing to this volume. […] With it’s helpful how-to tips and articles, the book is primarily directed towards other writers, and established pros at that. But many fans and scholars will enjoy the inside-the-business stuff.”

“I say this without a whit of exaggeration:TIED-IN edited by Lee Goldberg, and written by Lee and other members of the International Association of Media Tie-In Writers, is the most fascinating, entertaining and honest book about the writing life I’ve ever read. […] we see the pleasures and frustrations of this particular craft. And in the process we see what life is really like for professional writers. […] TIED-IN is rich with humor, lore, wisdom about the writing life.”

“For someone like me, who’s very interested in the history of popular fiction, the highlight of TIED IN is David Spencer’s “American TV Tie-ins from the 50s Through the Early 70s”, which is almost a book in itself. It’s a fascinating historical discussion of how the TV tie-in novel originated and evolved over the years and touches on many of the books I was buying and reading when they were new. This article really brought back a lot of good memories for me. Along similar lines, also of great interest to me were fine articles by Paul Kupperberg about comic book and comic strip tie-in novels (I read a bunch of those, too) and Robert Greenberger about the connection between pulp magazines and tie-ins. It’s informative, entertaining, and a must-have if you have any interest in tie-in fiction. Highly recommended.”