CAVAN SCOTT: It was probably either the Doctor Who Target novelizations of the 1970s, written mainly by Terrance Dicks, or Marvel UK’s Star Wars Weekly that reprinted the original run of Star Wars comics. Those two are forever mixed up in my head. Of course, I had no idea how important both properties would become for my career.

Let me guess… it was Doctor Who or Star Wars…

Doctor Who – mainly for the fanzine scene back in the late 80s/early 90s. The stories were of dubious quality, but I had fun with them, which was the important thing, and they certainly gave me the bug of seeing my name in print. Two stick in my mind. The first is a novelette that was published as a stand-alone ’zine by a local fan club. It featured a villain called Hankarda, a name I liked so much that I reused it in an officialSarah Jane Adventures audiobook many years later.

The second was a Doctor Who and Batman mash-up. I can’t remember the title, but it saw the Seventh Doctor comforting a grieving Bruce Wayne on the night of Thomas and Martha’s murder and convincing him that he could make a difference to the world. I was reading a lot of Detective Comics at the time. That sounds like a perfect mash-up. So…what was your first media tie-in gig? How did you get the job?

It was a Doctor Who audio for Big Finish Productions that I co-wrote with my friend, Mark Wright. We’d previously co-written a short story for a Bernice Summerfield anthology.

Bernice Summerfield, as created by Paul Cornell, is a spin-off of a spin-off, having sprung from Virgin Publishing’s Doctor Who: The New Adventures in the nineties. When Virgin lost the Doctor Who license, they carried on the series focusing on Bernice instead of the errant Doctor. In 1998, Big Finish started publishing Bernice audio dramas and books, and so Mark and I were invited by Paul to contribute something.

From there, we pitched a Doctor Who audio drama, and, in all honesty, didn’t expect it to be picked up—but Producer Gary Russell saw potential in the story, as long as we made some pretty radical changes. We eagerly agreed and Doctor Who – Project: Twilight came out in August 2001, with Colin Baker playing the title role. It’s fair to say that Doctor Who has been life-changing for me. If it wasn’t for working on that property, I doubt I would have been able to go freelance eight years ago. And it has been a constant ever since, giving me a chance to write more audio dramas, audiobooks, short stories, comics, non-fiction books and novels, including last year’s The Shining Man. Writing Doctor Who always feels like coming home.

Doctor Who: The Lost Dimension was one of the most challenging commissions I’ve ever had. This was Titan Comic’s big event for 2017, and was a joint venture between myself, and writers George Mann and Nick Abadzis. The brief was to celebrate modern Doctor Who in its entirety, while also bringing in as many Doctors and companions as we could.

Yikes. Were there limits imposed on you?

All of Time and Space was literally on the table. We came up with something that we were convinced no-one would approve, but approve it they did. It was a real lesson in ‘going big or going home.’ I’m glad we went big! Don’t make me choose between my babies!

I’m incredibly proud of the two-comic mini-series I wrote to tie-into History Channel’s Vikings, although a lot of that has to do with the incredible art by Staz Johnson for Vikings: Godhead and Daniel Indro for Vikings: Uprising.

No, away from comics, I think my favorites have to be my books in the Star Wars: Adventures in Wild Space series. I’ve had so many parents and teachers tell me that those books encouraged their kids to read. 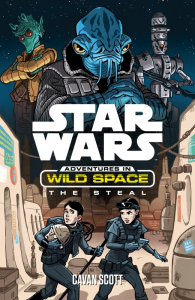 We had a similar thing with Choose Your Destiny: A Han and Chewie Adventure, published earlier this year. It’s so satisfying to hear that something you’ve written is getting children to pick up and enjoy books, in many cases for the very first time.

I’m not sure it was outside my style, but my first work for Warhammer 40,000 certainly saw me moving outside my comfort zone. It was my first job dealing with a fictional universe that I didn’t have a personal connection with, and the sheer volume of continuity was daunting. But my background as a magazine journalist paid off. In cases like this, it’s a case of knuckling down and doing the research. It’s no different to tackling an historical setting. You need to open the text books and get reading, absorbing everything you can about the world you’re working in. Of course, this being the world of licensed fiction, time wasn’t on your side so it was a bit of a crash course. I’ve two main projects on the go. One is Star Wars Adventures: Vader’s Castle, a weekly comic event published in October by IDW. It’s an anthology of spooky Star Wars stories featuring a cavalcade of monsters—ghosts, vampires, witches and, most terrifying of all… Ewoks!

It’s shaping up to be a lot of fun, with some amazing guest artists including Kelley Jones, Chris Fenoglio, Corin Howell, Robert Hack, and Charles Paul Wilson III. Best of all, the framing story—which sees a Rebel ship crashing into Mustafar—features Lina, one of the juvenile protagonists from the Adventures in Wild Spacebooks, now grown up and still fighting the Empire. Are all of your new gigs inside the Star Wars or Doctor Who universes?

No. The other is a series of Middle Grade novels set in the Warhammer 40,000 universe—Warhammer Adventures: Warped Galaxies. The first of six books is published next February. Adapting a purposely grimdark property for kids has been a challenge. I’ve had to focus on making things age appropriate while retaining the feel of the source material. As the series progresses we tackle more of the darker aspects of Warhammer 40,000. It’s not going to be an easy ride for our young heroes.

It has changed so much since I started out nearly two decades ago, thanks mainly to social media. I really enjoy engaging with fans of the properties I write for on Twitter, and of course, when it comes to Who and Star Wars, I’m a fan anyway, so love getting into debates about my favorite parts of the various universes.

It’s been good over all, then?

Largely, although not every experience is a positive one. Like a lot of creators these days, I’ve been targeted by the more toxic segments of the various fandoms. I’m always happy to discuss, but there is a small but vocal minority who rant, rave and hurl abuse. I try not to let those elements worry me as, on the whole, the various fandoms are overwhelmingly supportive and inclusive.

I’m currently firming up plans for next year, but I know I’m definitely going to be at Star Wars Celebration in Chicago next April and am hoping to be returning to San Diego Comic Con as well. What writing do you do outside of media tie-in?

In all honesty, tie-in writing has taken up pretty much all my time these last few years, but I have also been writing a number of books for reluctant readers over here in the UK, from a series for younger readers called Adventure Park to a series of standalone short books for teenagers, including The Changeling and Billy Button.

I’m currently working on a new middle-grade novel, a horror novel and a number of creator-owned comic proposals, none of which I can talk about yet.

Playing with toys as I write. I’m a bit of an action figure nut, so if the property I’m working on has figures, I usually end up buying one… or seven!

Of course, with things like Star Wars, it’s a legitimate research tool, as I ‘act out’ chases and fights using my toy starfighters and action figures.

That’s my excuse, at least…

Most of the time, I’m ticking off the properties that I loved when I was a kid, and I’ve yet to tackle Transformers, Ghostbusters, or Marvel super-heroes.

Writing a movie novelization is also on my bucket-list, as I use to devour  them as a teen. I had the chance to write one a year-or-so ago, but unfortunately the timings didn’t quite work. I’d love to have another shot.

Where to find Cavan online: