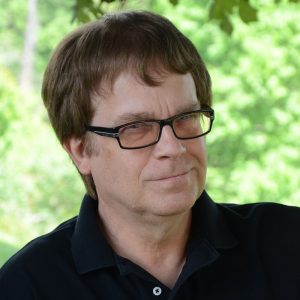 MAX ALLAN COLLINS: It was probably DICK TRACY AND THE WOO WOO SISTERS, bylined Chester Gould (but not really written by him). Even when I was a kid (I was probably eight or nine when I read it), the book was way out of print—a mid-40s Dell paperback. Not sure how I laid hands on it, but I was haunting used bookstores even at that early age, dragging my mother along. Throughout childhood and adolescence, I read the Whitman comic strip and TV tie-ins—TERRY AND THE PIRATES, RED RYDER, MAVERICK, GUNSMOKE, SPIN AND MARTY. I have a nice collection of those.

Did you write fan fiction? Tell us about it.

No. That was way after my time. I did write stories and write and draw comics about Tracy and other characters and passed them around to my friends.

When the DICK TRACY movie was in the works, I had my agent aggressively go after the tie-in. I was the writer of the strip (I was second to write it after the creator and did so from 1977 to 1993) and didn’t want anyone else writing that book. I was paid peanuts by Disney, but they screwed up and gave me a royalty—and we sold 800,000 copies. I paid off the mortgage on the house I still live in. The experience, however, was miserable—my first draft was rejected because I had drifted too far afield from the, shall we say, lousy script, and I was micromanaged after that. Despite the payday, it did not leave me wanting more tie-in work, although I did write two more TRACY novels for the same publisher. But when I left the strip in 1993, I needed work and had my agent let it be known I was available. Having had a big hit with the TRACY tie-in, I started getting movie tie-ins regularly—one or two a year. Tell us about your experience working with that license.

Well, I already covered that, but the worst was ROAD TO PERDITION, which was based on my own graphic novel. I was faithful to the script but fleshed it out with material from the graphic novel. I delivered something like 80,000 words. I really liked that book, and I still feel it’s my best novelization. But I was forced to cut it severely and use only the dialogue—verbatim—from the script. It was published at around 40,000 words and was a bestseller, got on the NY Times list. And I hated it. The happy ending came not long ago when Lee Goldberg’s Brash Books negotiated the rights to publish my original, complete work.

The major one—despite improving the TRACY script into a first draft that didn’t resemble it much—is that I break a rule a lot of other movie tie-in writers follow religiously. I throw the dialogue out, pretty much—just touch on it. But I follow the screenplay “out the door”—that is, I include every scene and every aspect of the plot. On the rare occasions I’ve been called on this, I point out that movie dialogue and novel dialogue are two different animals. The only time, ironically, I had to stick to the dialogue as scripted was ROAD TO PERDITION. Couldn’t write dialogue for my own characters.

With the movie novels, I have endeavored to make my novel seem like the book the movie was based on. I hear often that my book was better than the film. It
flows from recognizing that movies are exterior, and novels are interior. This provides the novelist with an opportunity to characterize with depth. Several of my movie novels remain in print—in particular, SAVING PRIVATE RYAN and now the full ROAD TO PERDITION.

I have been blessed with many good scripts—WINDTALKERS, AMERICAN GANGSTER, AIR FORCE ONE, and others of that high quality. When I was “hot” in this field, I turned several things down. Finally, my agent said that if I didn’t take the next offer, I would stop getting them. So I said yes to DAYLIGHT, which was a miserable script. What you have to do in any novelization situation is find your way into the material—find where you can relate to it. Doing MAVERICK—based on a movie version of my favorite childhood TV series, —was a breeze, a vacation with pay (William Goldman wrote it!). But DAYLIGHT was routine disaster movie fare. So I got the idea to do it like a documentary on paper, and give all of the survivors’ first-person chapters, as if they were being interviewed after the fact, withholding the protagonist from a viewpoint, so that if you hadn’t seen the movie, you wouldn’t know whether he survived. It’s probably my best movie novel. It was produced on audio with a full cast.

I would say GI JOE, which is probably my worst novel. I don’t feel responsible for that, given the material, and I frankly did not find my way in. There were scenes in the screenplay that I flat out couldn’t follow—couldn’t figure out what was happening. When I saw the movie, I still couldn’t.

On the other hand, the much-reviled WATERWORLD—science-fiction—came out very well. I still get fan mail (well, e-mails) on that one. I am a science fiction fan and never got the chance to write in that genre before. But that was the joy of writing those novels—with THE MUMMY I was in the horror area; with SCORPION KING I was doing Robert E. Howard and Burroughs; with AIR FORCE ONE I got to be Tom Clancy; with MAVERICK a writer of westerns, and so on. The TV tie-work, writing original novels, has mostly been fun and rewarding. CSI is a solidly designed show, but initially under-characterized, and that gave me plenty to play with. DARK ANGEL was a little out of my wheelhouse but viewing it as an adventure story was really all it took. Earlier I’d done NYPD BLUE and that was familiar territory with great characters. Hardest, and what I might be proudest of, are the three CRIMINAL MINDS novels. That’s a very mean-spirited, misogynistic show, with a lunkheaded premise—a whole team of profilers show up at crime scenes, like all Three Stooges showing up as plumbers. But with the help of Matt Clemens—who worked with me on CSI and DARK ANGEL, researching and co-plotting—those novels were very strong, I think. I am about to do a Mike Hammer novel. I have been working for ten years on Spillane projects for the estate, Mickey having requested I do so in the final weeks of his life. An incredible honor. I love doing those books. Not long ago I finished a Nate Heller novel, DO NOT HARM, about the Sam Sheppard murder case. And right now, I have a major non-fiction book out, written with A. Brad Schwartz, SCARFACE AND THE UNTOUCHABLE: AL CAPONE, ELIOT NESS AND THE BATTLE FOR CHICAGO. You could almost call it a tie-in for the Robert Stack UNTOUCHABLES TV series!

Fantastic. Great people. Some have been with me from the start, which goes back to the early 1970s.

Nothing planned at the moment, but more will come. I had some health problems that slowed me down on that front, but I’m doing very well now. I did three panels at the recent San Diego Comic-Con, and two panels at C2E2. What kind of writing have you done outside of media tie-in?

Most of my writing is non-media tie-in now. GI JOE sort of took the enthusiasm out of me. Mike Hammer is a license, and the only one I’m doing now. My Nate Heller series, in which a traditional tough PI turns up in the midst of famous unsolved 20th century crimes, is my best work and I hope to be able to do several more of those. I’ve turned several tie-in things down, but I also think the current editors don’t know me from Adam.

My only regret about doing the tie-in work is the lack of royalties on reprints. My son, Nathan, is a translator of Japanese into English — he’s done a ton of tie-in work, including manga. He wrote the most current translation of BATTLE ROYALE. But he gets zero royalties.

To me that’s criminal.

I enjoyed being able to write outside the genre with which I’m associated—to do war stores, westerns, spy yarns, sword and sorcery, horror, science fiction. Occasionally there was a real treat, like MAVERICK and THE X-FILES—the latter something I aggressively pursued and then, years later, got the second X-FILES movie novelization. You can’t hold out for just your favorite properties—professionals can usually find a way into the material…GI JOE excepted, for me.

Where to find Max online: