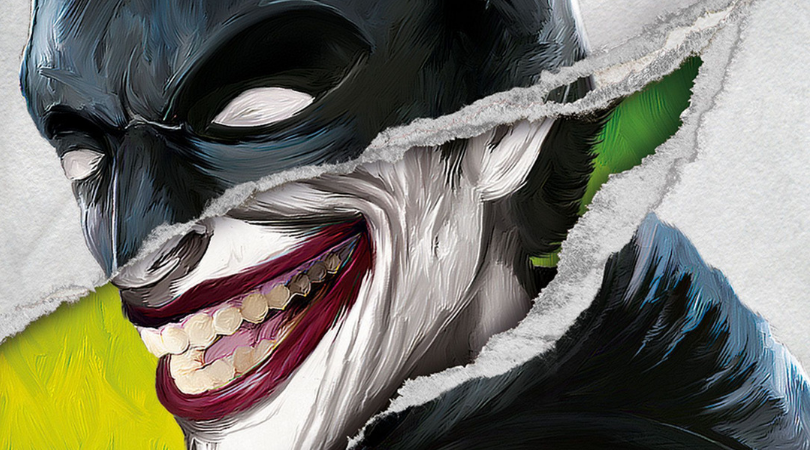 Raised in South Central, Gary Phillips has been a community organizer, run a political action committee and delivered dog cages. His book Violent Spring was the first mystery set in the aftermath of the events of ’92. He has published various novels, short stories and comics. 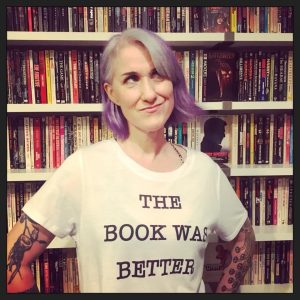 CHRISTA FAUST:I think it was either Cat People (82) or Conan the Barbarian.

GARY PHILLIPS: It was the Great Gold Steal featuring Captain America by Ted White. I remember it ’cause Cap takes LSD at one point in the story!

Did either of you write fan fiction?

CHRISTA: Nope. Even as a child, I always preferred to make up my own characters. However, I did convince several friends to participate in shared world storytelling using the characters I invented, so I guess you could say I authorized my own kind of fan fiction. 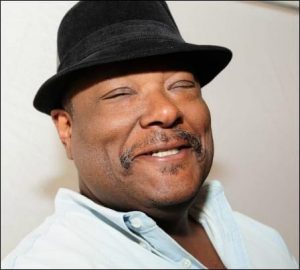 GARY: I came up during the time of fandom and fanzines before you kids had them fancy Internets what with it being a series of inter-connected tubes. I was going to be the next Steranko and Joe Kubert, writing and drawing my own superhero strips like Captain Saucer and King Lion.

CHRISTA:I believe it was the early ’00s Twilight Zone reboot, a strange little gig that involved two TV episodes novelized in one book. In my case “Burned” and “One Night at Mercy.” I got the job because the author they wanted to hire didn’t have time for the project and he recommended me. 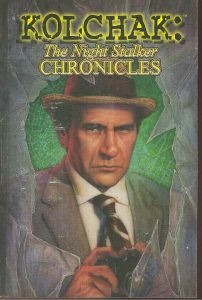 GARY: For me too is was the early aughts and it was two short stories about Kolchak: The Night Stalker for an anthology Moonstone published. I had to do two because even though in the world of mystery fiction, a 5,000 some odd word story was acceptable, I had to have 10,000 plus to make the word count for the project.

CHRISTA:It was kind of a wild west situation over at Black Flame back then. I had no contact or input from the license-holder at all. There was very little oversight and the editor was pretty hands off. I was a newbie with no guardrails so I just took the bare bones concept of the two episodes—a mean landlord burns his building for the insurance and Death decides to stop killing—and ran with them. I had to learn how to swim in the deep end and figure everything out for myself as I went along.

GARY: I was pretty sweet. I guess Jeff Rice, the guy who created Kolchak, had retained or gotten back the prose rights and had worked out a deal with Joe Gentile, Moonstone’s guru. I don’t even recall having to write a synopsis for approval, just produce the work. Now having ghostwritten a crime fiction novel, I wasn’t too bent out of shape when Christa hipped me to the process we had to go through to co-write our novelization of The Killing Joke. There was some degree of back and forth on our outline, but I have to say I’m pleased with the final outcome. A tough, terse entry into the canon. 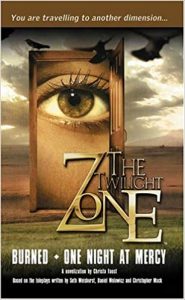 CHRISTA: Like I said, I had a lot of creative freedom in those early Black Flame days, but for the most part my more recent projects have been tightly controlled by the license holder. You can still be creative—in fact, you have to be in order to make the stories work as prose—but ultimately nothing gets through to the final draft without explicit approval from everyone involved.

GARY: To chime in on what Christa said, I think because you have to go more into the interior landscape of the characters, given the real estate text-wise you need to cover, you can fool around some with nuance and their perceptions. Again with The Killing Joke, because there has been so much retconning of the Batman mythos—the Gotham TV show, the animated versions, the New 52 to name just three, that in turn loosened up the reigns in terms the nature of continuity. The main story points we wanted to tackle—setting the story in 1988 when the graphic novel was published, using the Arpanet, Barbara Gordon having agency, Harvey Dent ripping off a drug dealer, and so on—we were able to keep in. But yeah, all said and done, the reader still has to recognize these characters from the source material and want to take the ride with them.

Other than the media tie-in work you’ve done, what are you most proud of?

CHRISTA: Snakes on a Motherfucking Plane. I had so much fun with that book, and I’m proud of having taken a completely ridiculous premise and actually made the story hang together. My favorite bit was this scene where the mean middle-aged guy makes a snarky comment about a baby on his flight and the saintly mom cuts him down with a snappy comeback. I hate babies too, on planes or anywhere really, so I turned the scene around, told it from his POV and really teed off on the subject.

Nobody wants to admit they have a favorite child, but that’s the one they’ll put on my motherfucking tombstone.

CHRISTA: I’ve never done anything that was all that far outside my normal style, because when projects like that are offered I usually turn them down. I know my strengths and weaknesses and while I’m willing to stretch and challenge myself to some degree, I also don’t see any point in taking a gig doing something like, say, high fantasy when I know that’s not my jam and there are so many other writers out there that love that shit and would be perfect for that gig. Which is why I tend to kick those projects down to writers I know whenever I can, just like my first gig was kicked down to me.

GARY: I haven’t gotten there yet, but it would be anything featuring doctors. I mean I go to the doctor regularly, not afraid of needles, aware of this and that I put in my body, but don’t watch any doctor shows on TV. Don’t really know what it is, but there you have it. 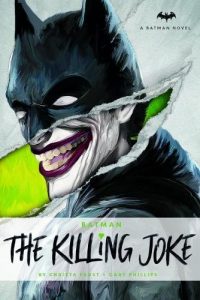 CHRISTA: My current WIP is the third book in my Angel Dare series for Hard Case Crime, which is my own thing. However, my most recently completed project was the aforementioned Killing Joke novelization I wrote with Gary.

How did that project come to you?

CHRISTA: That gig came to me in the same manner as all my tie-in and novelization projects (after the first). I was contacted by the editor, who I’d worked with in the past and who thought I’d be a good fit. The property owners were looking for a female author known for creating strong female characters in order to address some of the more controversial elements in the original. I agreed to take on the job with the proviso that I would co-write with Gary, who is far more experienced and knowledgeable about comics in general and the history of the Batman Universe in particular. Working together, we created the perfect balance for that particular project.

Gary…what are you currently writing?

GARY: My WIP is a short story set in the shared universe of Occupied Earth, an anthology me and my buddy Richard Brewer conceived off a couple of years ago. This will be for the second collection and features two characters—including our super soldier Hunter X—from the first iteration.

CHRISTA: Well, as a fan, I came of age at a time when there weren’t as many opportunities to connect, so—occasional Fangoria conventions notwithstanding—I was basically on my own with my obsessions. I certainly never in a million years imagined that I would be able to communicate directly with an author or creator to express my opinion about what they should or shouldn’t do. As far as my experience with fans, by far the majority have been wonderful and enthusiastic, but it’s always going to be a mixed bag. I’ve had fans who loved what I did with their favorite property and fans who hated my books and weren’t shy about letting me know what they thought I’d done wrong. I tend not to take either opinion too seriously.

Well, you know what they say…some people would complain if you hung them with a brand-new rope. So, Gary, how has the fan experience been for you. Both as a fan and a celeb dealing with fans?

GARY: My fan experience started off with fanzines like Star-Studded Comics, a big, offset printed magazine sized comic that featured early works, text stories, by George R.R. Martin, artists like Don Newton who became a pro, and cool characters like Grass Green’s Xal-Kor, the Human Cat. As to my work, for sure some who’ve read it don’t sugarcoat their dislike of it and others are more positive.

Will either of you be at any upcoming conventions?

CHRISTA: Not for the next six months or so, because I’m in a self-imposed hermit phase right now. I really need to buckle down and finish my current WIP, as well as another top-secret project I’ve got in the works.

GARY: I may be prowling about Wondercon but probably only in a fan capacity.

I’ll see you there. Let’s grab coffee. So, neither of you are predominately media tie-in writers. So, talk about the writing you do outside of media tie-in.

CHRISTA: I write primarily noir and hardboiled crime fiction. I was the first woman to be published by Hard Case Crime.

GARY: In addition to writing crime fiction and such, I’ve edited or co-edited several anthologies including the award-winning The Obama Inheritance: Fifteen Stories of Conspiracy Noir.

I loved that book. And so did a lot of other people. It won the 2017 Indie Book Awards Bronze Medal and the 2018 Anthony Award. And it featured a story by Danny Gardner, a brilliant new novelist. I gave him a well-deserved cover blurb for his novel A Negro and an Ofay.You have a good eye for talent.

CHRISTA: I find that the enforced rules and boundaries of the form force me to be more creative, keeping my writing chops sharp while giving me the opportunity to play in other people’s worlds.

CHRISTA: I do have a crackerjack idea for an Escape from New York/ Snake Plissken story…

GARY: I’d love to do a Ghost Dog novel. Oni Comics did a miniseries with the character post the movie—and yes he dies onscreen, but when did that stop a stepper?

Where to find Christa online:

(Christa does say that she’s on a social-media break right now: “Feel free to scroll backwards and get to know me and I promise I’ll be back soon.”)

Where to find GARY online: